Attorney Minsky publishes a nationally recognized student loan blog. In addition, he is a Senior Contributor on Forbes, he has published books, written and co-written book chapters and articles on student loan law, and he’s been interviewed by major news outlets in Massachusetts, New York, and beyond on the latest developments in student loan policy.

The Student Loan Handbook for Law Students and Attorneys

The #1 guidebook for lawyers with student loans, with roadmaps for specific attorney career paths. Published by the American Bar Association. 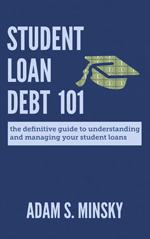 Student Loan Debt 101: The Definitive Guide to Understanding and Managing Your Student Loans

Whether your loans are federal or private, in good standing or in default, this guide helps you determine the best way forward. 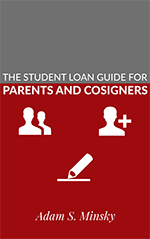 The Student Loan Guide for Parents and Cosigners

A practical guide to federal parent loans and cosigned private loans that will help you avoid problems, and show you some options if you’re already in trouble.

Author, “Can You Get A Mortgage Even Though You Have Student Loan Debt?”
The 2014 Homebuying Mentors Resource Guide, January 1, 2014

“A window is closing for government, nonprofit employees to get student loans forgiven,” Marketplace, October 27, 2022

“What’s Next in the Fight Over Student Loan Forgiveness,” Time, October 25, 2022

“How to Apply for Student Loan Forgiveness ,” The Wall Street Journal, October 22, 2022

“Will the freeze on student loan payments get extended again?,” Fortune, September 9, 2021

“When It Makes Sense to Refinance Your Student Loans, and When It Doesn’t,” NextAdvisor in partnership with Time Magazine, November 9, 2020

“Everything Students and Parents Need to Know About Getting Financial Aid and Student Loans,” People Magazine, October 1, 2020

“For Student-Loan Borrowers, There Is Some Relief—but That Isn’t the Whole Story,” The Wall Street Journal, September 7, 2020

“Have a Student Loan From a Private Lender? Here’s How to Get Some Relief,” The Wall Street Journal, July 5, 2020

“How to make a student loan complaint that gets results,” The Associated Press, February 27, 2020

“The Education Department’s ‘Expanded’ Loan-Forgiveness Program for Public Service Has the Same Rejection Rate as Before: 99 Percent,” The Chronicle of Higher Education, September 5, 2019

“State lawmakers propose to regulate student loans — all but inviting a lawsuit,” The Boston Globe, February 6, 2019

“Yes, you still need to pay your student loans during the shutdown — but you could hit some snags,” MarketWatch, January 13, 2019

“Gifting your kids a ‘career concierge’ could give them an edge to land that dream job,” MarketWatch, December 9, 2018

“Don’t make this common student loan mistake that can cost you thousands of dollars,” CNBC, November 30, 2018

“Yes, It Really Is Possible To Discharge Student Loans In Bankruptcy,” The Huffington Post, November 16, 2018

“Is the interest rate on your student loan going up? Here’s what you can do about it,” MarketWatch, August 21, 2018

“This map shows the states where the student loan crisis hits the hardest,” CNBC, August 1, 2018

“6 Legit Ways To Lower Your Student Loan Payments,” The Huffington Post, May 9, 2018

“Trump administration may make it easier to wipe out student debt in bankruptcy,” CNBC, February 22, 2018

“What Parents Can Do to Reduce Borrowing and Repay College Loans,” U.S. News and World Report, February 15, 2018

“What Every Borrower Should Know About Student Loan Interest Rates,” U.S. News and World Report, February 6, 2018

“On How Having Student Loans led to a Profitable Solo Practice – with Adam Minsky, Student Loan Lawyer (podcast),” The Happy Lawyer Project, January 23, 2018

“Parents, What to Know Before You Borrow for Your Child’s College Education,” U.S. News and World Report, May 2, 2017

“This is the fastest-growing segment of borrowers burdened by student loans,” The Boston Globe, January 22, 2017

“Until debt do us part: When shared bills outlast the relationship,” The Boston Globe, December 27, 2016

“The Difficult Task of Qualifying for Student Loan Refinancing,” The Boston Globe, August 14, 2016

“Is This Robocall Illegal? The Line Blurs for People with Student Debt,” MarketWatch, February 5, 2016

“Debt Dodgers: Meet the Americans Who Moved to Europe and Went AWOL on Their Student Loans,” VICE, January 17, 2016

“When Your Social Security Check Disappears Because of an Old Student Loan,” MSN Money, June 25, 2015

“Activists Hope to Turn a Debt Strike Into a Movement,” The Chronicle of Higher Education, April 10, 2015

“These Debt Strikers Are Refusing to Pay Their Student Loans,” Vice.com, March 31, 2015

“How to Manage Your Student Loan Debt, and Other College Loan Questions. An Interview with Adam S. Minsky,” Boston.com, September 18, 2014

“Why Obama’s Budget Has a Bunch of Public Service Workers Worried About Their Student Loan Debt,” Boston.com, May 30, 2014

“Government to Switch Student Loan Servicers: What You Need to Know,” Credit.com, August 15, 2013.